What is the Endocanabinoid System?

What is the Endocanabinoid System?

If you wonder what is Endocannabinoid System (ECS)? It is a recently discovered group of endogenous cannabinoid receptors found throughout the body.

The ECS has been called “the most important physiologic system involved in establishing and maintaining human health”. 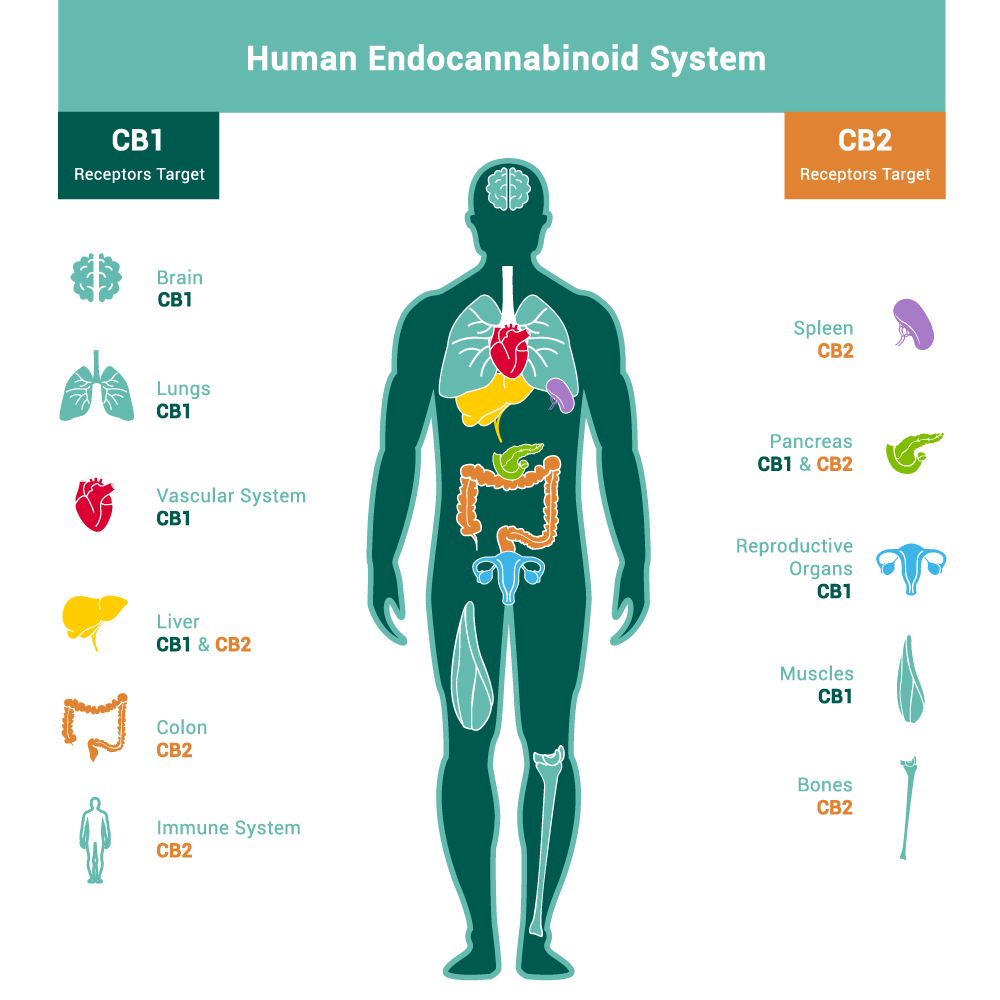 Our CNS includes our brain and spinal cord, while the PNS acts as a communication network linking our CNS to the rest of our body. Our brains contain the heaviest concentration of cannabinoid receptors, but there’s no shortage of them in our organs, tissues, glands, and more.

The saturation of ECS receptors throughout our body is part of why CBD has so many uses and is so effective.

Why don’t more people know about the endocannabinoid system (ECS)?

We have known about the Endocannabinoid System for about 25 years. It was first discovered in the 1990’s, by L.A. Matsuda. Dr. Matsuda was the first to describe the structure and functional expression of the cannabinoid receptor, CB-1.

Scientists were trying to understand how THC, the primary intoxicating substance in marijuana, affected the body. What they discovered was a remarkably complex network of cannabinoid receptors (CBr) expressed in cells of both the central and peripheral nervous system

Since then other cannabinoid receptors have been identified including cannabinoid receptor type 2 (CB-2), which is found primarily in the immune system, digestive system (gastrointestinal-tract), and many of the body’s major organs. But these receptors were only half the story. The discovery of CB-1 and CB-2, prompted a hunt for the body’s own cannabinoid-like chemicals that naturally interact with these newly discovered receptors. Why would the body produce receptors if there were no naturally occurring cannabinoids that would bind with them?

What exactly does the Endocannabinoid system (ECS) do?

We do not have a full and complete picture of what the ECS does but we do know that the ECS helps fine-tune most of our vital physiological functions. It promotes homeostasis affecting everything from sleep, appetite, pain, inflammation, memory, mood, and even reproduction. So in basic terms, the ECS helps modulate the regulation of homeostasis across all major body systems ensuring that all systems work in concert with one another.

1. All animals have an Endocannabinoid system (ECS).

As humans beings, we like to think of ourselves as special, but we’re not special for having an ECS. All vertebrates and invertebrates are known to have an ECS. The most primitive animal found to express cannabinoid receptors is the sea-squirts, an animal which evolved over 600 million years ago.

2. Endocannabinoid receptors are the most abundant neuromodulatory receptors in the body.

3. The endocannabinoid system (ECS) has been found to play a role in many diseases.

The ECS helps bring balance to the body. As a result, it is no surprise that scientists have observed changes in ECS activity in a number of diseases. Everything from neurodegenerative disorders to rheumatoid arthritis and cancer have shown changes in endocannabinoid levels and greater receptor expression. This suggests that the ECS may be an effective target for restoring balance in the body and promoting good health.

4. Clinical Endocannabinoid System (ECS) Deficiency Syndrome may be a root cause of some diseases.

When the ECS is functioning properly, all our various body systems are maintained in a state of dynamic equilibrium, or homeostasis. But what happens when the ECS is dysfunctional or damaged? Scientists have found that certain conditions which are associated with hypersensitivity to pain or stimulus, such as migraines, fibromyalgia, and IBS, the ECS is dysfunctional. This hypothesis, that the ECS may lie at the root of some disorders, is known as the Clinical Endocannabinoid Deficiency hypothesis. It is believed that by supplementing the body with naturally occurring cannabinoids from plants, we can correct this deficiency, relieve symptoms, and restore health.

5. The endocannabinoid system (ECS) explains why natural cannabinoids in hemp and other plants have therapeutic effects.

Before cannabis prohibition, hemp and marijuana had been used for thousands of years to treat a number of ailments, including epilepsy, headaches, arthritis, pain, depression, and nausea. Traditional healers may not have known why the plant was effective but their experience demonstrated its effectiveness and provided the basis for later scientific inquiry. The discovery of the ECS revealed a biological basis for the therapeutic effects of plant cannabinoids and has sparked renewed interest in cannabis as medicine.

6. Exercise and diet can also boosts the endocannabinoid system (ECS).